"To me, there's only 5 real jobs in America: Police Officers, Teachers, Firefighters, Doctors, and the Military Service"
- Charles Barkley

Do you want to find your calling? Join Us Today! 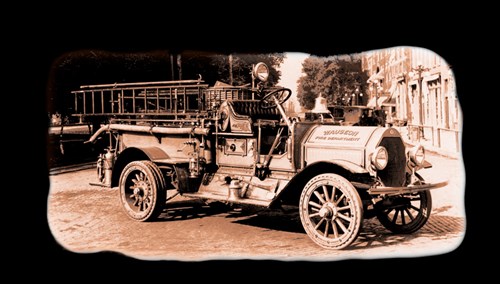 The Wauseon Fire Department was first organized in January 1862 as the “Private Fire Company”.  Fifty dollars of village funds were appropriated to build a “Fire Engine House” to serve the needs of approximately 400 citizens that lived in the village of Wauseon at the time.  Another $10 was given to Milo Portor for 100 feet of fire ladder.  It was during this era that a hand pumper was purchased from the City Of Toledo and today this same pumper is completely restored and on display at the Toledo Fire Department Museum in Toledo, Ohio.

A hose cart was obtained followed by a ladder wagon, likewise pulled by hand.  The source of water for the hand pumper was a series of large cisterns located along Fulton Street.  For areas out of reach of the cisterns, private cisterns and open wells were used.  A bucket brigade was established which involved private citizens in the battle against the flames.

The first fire engine was purchased in 1863.  The fire engine’s first “siren” was a trumpet donated by the “Phoenix Insurance Company”.  The fire engine was first used at a fire on Thursday, April 30, 1863 at about 2 p.m. in a dwelling house of B.S. Waldron, which was approximately 100 rods from the engine house.  The engine and company were on hand soon after the fire was discovered, but on account of the scarcity of water did but little execution.  The company afterwards took the engine to the reservoir and “worked it successfully”.

In May 1863, the company voted to uniform themselves as a fire-fighting unit. By 1864, Wauseon was growing considerably in population as well as the business section of town and the many proprietors expressed the need for a more capable fire fighting team.  In January 1874 the “Wauseon Volunteer Fire Department” was established and the “Private Fire Company” was disbanded.  In 1875, the second fire engine was purchased.  Both the new fire engine and the original engine were useful additions to putting out the many fires that wood and coal-burning furnaces and stoves caused during the cold winters in Northwestern Ohio.

With the installation of the Wauseon water system and the invention of the automobile, the way was paved to purchase a motorized fire truck in 1916, a “Seagrave” pumper was purchased, which is currently being restored by department members and is currently on display in the Wauseon Fire Dept.

In the late 1930’s the need for rescue squad service was foreseen by the various Fulton County Fire Departments.  The first squad was purchased from funds raised by the “Wauseon Fire Department’s Annual Feather Party”.  Since the 1930’s, equipment has been purchased with money from this annual fundraiser with special equipment being donated by various organizations throughout the years.

In 1995, a major building project was undertaken to remodel the existing fire hall. Demolishing an existing building addition allowed a 10,000 sq. ft. building addition to be added to the south end of the building.  While undergoing renovations, the fire department temporary moved into the vacant “Miller Ford” dealership located on Shoop Ave. for over 14 months and in December of 1996 the members of the Wauseon Fire Dept. proudly moved into our current facilities.

One of the more unusual projects that the Wauseon Fire Dept. was involved in was the 1974 “pot party”.  The department was asked to burn an old house in town to make room for a new factory.  The county sheriff saw the controlled fire as a good way to dispose of about $5000 worth of confiscated drugs and illegal fireworks.

The training of firefighters has evolved over the years from merely learning from experience on the job to today’s firefighters constantly undergoing rigorous State of Ohio required refresher training in firefighting techniques & EMS.